Navigate back to the homepage

The number one aim of all marketers is to understand the consumer in great detail. Today, we often assume advertising to mean television ads, YouTube ads, Facebook ads and more. However, advertising has been around for ages, much before the internet and even the television even existed. Even then, top brands competed to create the best value for their consumer. Of all the brands that have become a part of our life, Coca-Cola is a particularly apt example.

First manufactured in 1886 at Atlanta, today it has become an integral part at social gatherings, parties and even in homes. Studying the fascinating journey of one of the world’s most beloved brands can help understand the trends and change in advertising strategy better today. 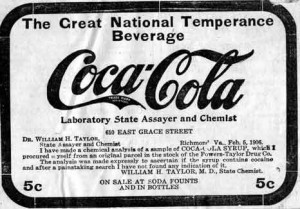 In 1906, American society was transitioning away from one that preferred alcoholic beverages to other alternatives, and Coca-Cola made their mark here with the slogan ‘The Great National Temperance Beverage’. Since alcohol was increasingly being associated with instability and chaos, the word ‘temperance’ automatically created a positive connotation with Coke. 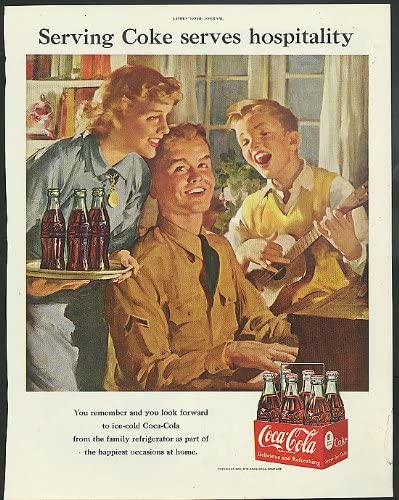 Source: Ladies Home Journal 3/1951 Post this, for some years, Coke ads focussed on their quality and popularity. By the 1940s, Coca-Cola realised that their product went beyond its functional benefits and served a broader purpose as well- an accompaniment while socialising with friends and family. This is when they came up with newer taglines such as “serving coke serves hospitality.”

The ‘Hilltop Ad’ shows a group of racially and ethnically diverse young people singing about wanting to buy the world a coke. Today, such an ad might not seem very powerful, in fact, it might even be considered insensitive by some. However, the ad struck a chord with the consumers in the 1970s as they felt it captured the essence of the decade perfectly. By that time, Coke was fast rising in popularity in different countries, and this ad established them as a global brand all across the world in one stroke. The copy is simple but conveys the feelings of hope, harmony and togetherness very succinctly, all of which are part of Coke’s motto. When Coke first launched in India in 1956, it targeted the youth with its message of a fun drink to accompany good times with friends. In 1977, it sponsored the tri-nation Cricket Cup, which India won. It then came to be known as the Coca Cola cup.

Focusing on the younger demographic, Coke targeted emotions of friendship, fun and excitement. It brought on board popular actors to deliver this message. Its iconic campaign that came soon after its launch had the line “jo bhi chahe ho jaaye, Coca Cola enjoy” says it all. It shows best friends who bicker and fight over college elections, bonding later over a bottle of Coke. It also captures the energy and enthusiasm of colleges while making a memorable ad:

In earlier decades, places to hang out with friends and significant others were mostly outdoors, such as beaches, parks and lakesides. Combined with India’s hot climate, the appeal of Coca-Cola as a refreshingly cool and fun drink was very well suited for the Indian market. In India, people were already habituated with asking for “thanda”, by which they referred to a cool drink. It could refer to any soft drink or juice. Coca-Cola adeptly utilised the opportunity with a catchy slogan “Thanda matlab Coca-Cola” and associated its brand with this definition, thus reminding all Indians about its refreshing nature.

In recent years, Coke realised that it had become too huge a brand to play along only one connotation such as that of friendship, fun, refreshment or more. It expanded to its campaign of “Open Happiness”. The aim here was that when you open a Coke bottle, you say yes to happiness. These ads showed kids as well as adults, from towns as well as cities in these campaigns, showing that everyone is bonded by the same happiness when they open a coke together. Such a tagline brings so much positivity to an already existing brand.

Coke truly captures a large number of events, occasions and moments of which it is a part- from birthday parties and winning cricket matches to high school reunions and, sometimes, at crucial moments of life as well. Coke beautifully captured all of it with the one word common to them- happiness.

Everything You Need to Know About How Social Media - Part 2

Read about the growth of Snapchat and TikTok, Responsibilities of Social Media Giants to curb fake news